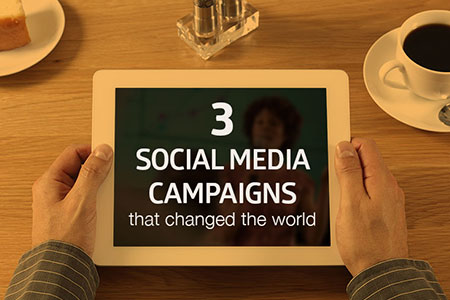 The rise of social media and the Internet has brought about a whole new way to bring about social change in your community and the world. Are you excited and passionate about a cause? Here are three campaigns started by people who turned their passion into a social media phenomenon.

The ALS Ice Bucket Challenge made waves across the Internet in the late summer of 2014, when millions of people dumped buckets of freezing ice water on their heads to raise awareness for a neurodegenerative disorder known as Lou Gehrig’s disease. The true origins of the Ice Bucket Challenge are unclear, but minor-league golfer Chris Kennedy was the first person to connect the challenge to ALS when he took up the challenge on July 14th. From there, ALS patient Pat Quinn has been credited with kick starting the campaign. After Quinn challenged his friend and former Boston College baseball player Pete Frates, who also has ALS and posted the video on Facebook, the trend went wild on social media, raising over $115 million in donations in a matter of months.

Movember (the “mo” referring to the British spelling of “moustache”) first started in Melbourne, Australia in 2003. In that first year, two friends recruited 30 of their other friends in the community to grow beards to raise money for a cause and organization they were passionate about, the Prostate Cancer Foundation of Australia. Over the next decade, the movement continued to grow and now has participants from all across the globe.

After the 2013 Boston Marathon bombing, a man from Cleveland named Curtis Clough tweeted a simple message just hours after the bombing:

In the following year, the same hashtag was used more than 1.5 million times and became the tagline in support of those affected by the Boston bombings. The hashtag #bostonstrong was printed on t-shirts, billboards, written on sidewalks and used in speeches and on social media. Eventually, it was used to help raise money for the victims and families though One Fund Boston established by Massachusetts Governor Deval Patrick and Boston Mayor Thomas Menino.

You Can Make a Difference

Just like these people turned their passions into social campaigns for change, you can too. Whether it’s a catchy hashtag or a viral video, use your creative energy to build a community of like-minded people sparking change in the world.

Get Assist is coming soon and will help you connect and build communities for change. Subscribe to our blog for regular tips about volunteering and philanthropy

Preparing For Business To Be Booming In a Post-COVID World
Well, great. The COVID vaccine still won’t be available for everyone for a bit, and for society to return to normal, we need to achieve herd (60-70%...
Read More