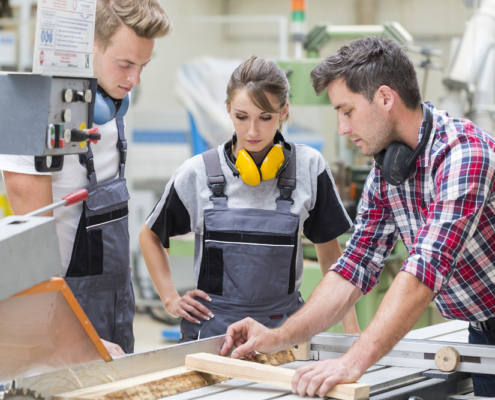 It is estimated that Canada will need one million skilled trades workers by 2020 and there will be a shortage of 800,000.

Why is there a shortage?

Experts think it boils down to a perception distortion amoung the youth. A survey by the Canadian Apprenticeship Forum and Skills Canada found that 71% of students surveyed claimed that their guidance counsellors in high school did not encourage them to go into skilled trades.

“Parents and teachers sometimes see trades as an area for “those who couldn’t cut it” in college or university… I don’t know many college or university programs that allow people to come out with minimal debt and at the same time be able to make $70,000 a year their first year they’ve completed their training.”
Colleen Dignam – Provincial training co-ordinator with the Carpenters’ District Council of Ontario

To have a viable job in the skilled labour industry, one must be trained hands-on and work their way up. This likely means an apprenticeship while cohorts are attending university, and enjoying a normal college experience. When one’s peers, parents, and most of society believe the following myths about the skilled trades industry, it can be hard to stand tall and alone, even if that is really what one “wants to do when they grow up”:

Myth 1 – You won’t make any money during your apprenticeship.

Most apprentices start by earning 40 – 60 % of the salary of a certified journeyperson and their pay increases the closer they get to certification.

Myth 2 – A job like that doesn’t pay very much.

Myth 3 – There’s not enough work to feed a family.

According to the Canadian Apprenticeship Forum, 40% of all new jobs in the next two decades will be in the skilled trades and technology sector.

81,000 skilled workers are expected to retire in this decade, leaving a big footprint to fill.

Myth 4 – Only men can have a career in skilled labour.

While there is currently a small percentage of women in the skilled trades industry, those surveyed in various studies seem to convey that one of the major barriers to having a career in it, is women and young girl’s own perception that they can’t. The women who have stuck with it report high wages and fulfilling work, even though they often have to prove themselves more than their male co-workers.

Myth 5 – You have to be young to start a career in the skilled trades.

Given that most apprenticeships are paid, and unemployment is high, there is nothing to lose if one has an interest in learning a skilled trade. The average age of an apprentice in Canada is 27.

There is a huge opportunity for Canada’s young, old and in between.

It is time for skilled labourers to be viewed as just as essential and prominent as doctor’s, lawyers, and engineers. If you are lucky you may go your whole life without personally needing a lawyer, but it is guaranteed you will need a plumber at least one time in your life – no one is that lucky. What about the roads you drive on every day? Or the house you live in? These things all require the excellent work of someone who has applied themselves to their craft.

“Consider the reality of today’s job market. We have a massive skills gap. Even with record unemployment, millions of skilled jobs are unfilled because no one is trained or willing to do them. Meanwhile, unemployment among college graduates is at an all-time high, and the majority of those graduates with jobs are not even working in their field of study. Plus, they owe a trillion dollars in student loans. A trillion! And still, we push a four-year college degree as the best way for the most people to find a successful career?”
Mike Rowe – Former host of “Dirty Jobs”, Founder of the mikeroweWORKS Foundation

GetAssist is dedicated to helping the skilled tradesperson connect with those in their community who need their expertise to make their lives better. ‘Make a GetAssist Request’ for any help you may need in your everyday life at home or work, and you will be connected with an experienced and capable laborer who can solve your problem or create a better space for those you ‘Connect with Purpose’ with.

Want to join the discussion?
Feel free to contribute!

Seven Benefits of Winter Roof Repair
Can you fix your roof in the winter? The answer is yes; in fact, we have solid reasons as to why you should. So, if you’re looking for a residential...
Read More

Become an Investor
The Benefits of Hiring a Handyman (or woman)