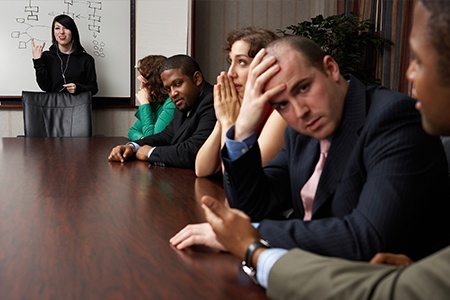 Does anyone appreciate business jargon? Or are we so accustomed that we don’t notice the obscure idioms companies toss around on the daily? The marketing industry, for one, is known for its overstretched vocabulary and “laser-focused” buzzwords (see how we did that?). And while each of the words in our list has a ring to it, they’ve come to our attention as being overused, outdated, somewhat cliche, and, most importantly, vague. We highly recommend avoiding using buzzwords that don’t hold any weight if you want to see positive change throughout your organization.

The international staffing agency, Accountemps, conducted a poll asking 100 Canadian senior executives what they think are the most overused catchphrases or buzzwords in the workplace today.

The data collected from the poll suggested, “business communication should be clear, straightforward and devoid of industry jargon,” Kathryn Bolt, president of Accountemps’ Canadian operations, said in a statement. “When terms are overused, they lose their effectiveness.”

She added: “While it can be tempting to rely on buzzwords from time to time, employees increasingly are being evaluated on their communication skills. Avoiding overused terms, particularly in formal communication, will help workers communicate more efficiently and professionally.”

Here are 16 overused buzzwords you should stop using immediately:

Looking for more helpful business tips and tricks? Sign up for the GetAssist blog for updates straight to your inbox! No spam, we promise!

Change Your Yard For A Healthier Spring With GetAssist
If a pandemic calls for staying home, you might as well enjoy the space you’re confined to, right? Many social distancers are taking the initiative ...
Read More

Guide: What GetAssist Gives the Saskatchewan Community
We bear great news to all small business owners in Saskatchewan, Canada: GetAssist is now available! Shortly, we will be there to connect businesses w...
Read More

Aspiring to Greatness: Be More Than Just Coach
Scroll to top